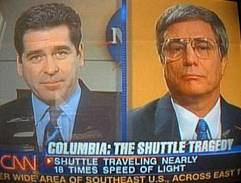 This has been around for a few months, so apologies if this is all old hat – but I thought it worth highlighting in any case.

Peter Norvig is Google’s Director of Research (which he says is the best job in the world at the best company in the world – more here). By all accounts, he is a clever chap. He is co-author of a best-selling textbook on artificial intelligence. Apparently he once aspired to be a reporter himself but has lately been "appalled” by the shoddiness of the craft.

So appalled that he has posted a lengthy piece of vitriol here about the shortcomings of the journalistic profession today. The whole thing is well worth reading (especially the bit about parrotting and inummeracy in financial reporting). Here are his four key findings:

Is Norvig himself being guilty of a less than thorough scientific approach ie is he extrapolating from too few data points to support his argument? Then again, if the CNN/Spaceshuttle example above is anything to go by, maybe he is on to something.